The Mercurial Superfly V leads this pack with a fade pattern white and Racer Pink upper.  The upper includes the typical top-of-the-line techs: the Dynamic Fit Collar, Full Flyknit Construction, Speed Ribs, and couples with the less visible techs of the internal Grip System, which keeps the boot from slipping around the foot, an ultralight 3D Speed Plate that has been re-engineered, and a speed-minded stud pattern.

In what I believe is the best looking color way of the bunch, the Phantom flashes in white and Photo Blue.  Like the Superfly, the Phantom maintains its collar, Flyknit, and Flywire from previous iterations.  The upper’s Poron foam pods maximizes shot power, and the HyperReactive soleplate has a flexible forefoot to amplify cutting, speed, and stability.  The studs add to the gains with lateral chevron patterns. 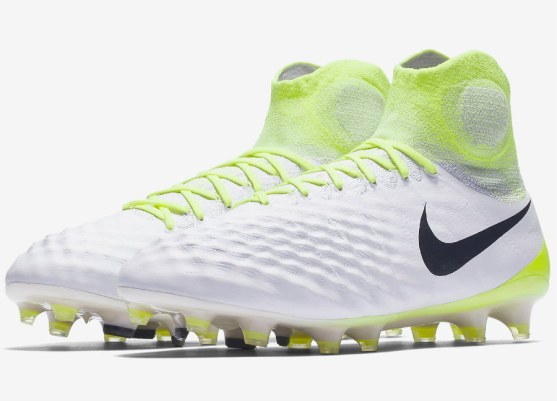 When the Obra II is compared to its two companions, it is uncharacteristically mellow.  The white and Volt upper is textured for better touch control and also has the collar and Flyknit.  However, a difference does trickle down to the Magista Opus II; it features a KangaLyte upper that has the same type of texturing  as the Obra, just without the collar.  The plate includes a circular stud pattern on the forefoot that allows for increased agility.

Following typical type, the Legend VI is subdued and classy.  The Electro Green, a name too flashy for itself, plays against the white kangaroo upper with successful subtlety.  Largely unseen is the new midfoot cage and the flexible plate, both of which allow for improved control, feel, and touch.